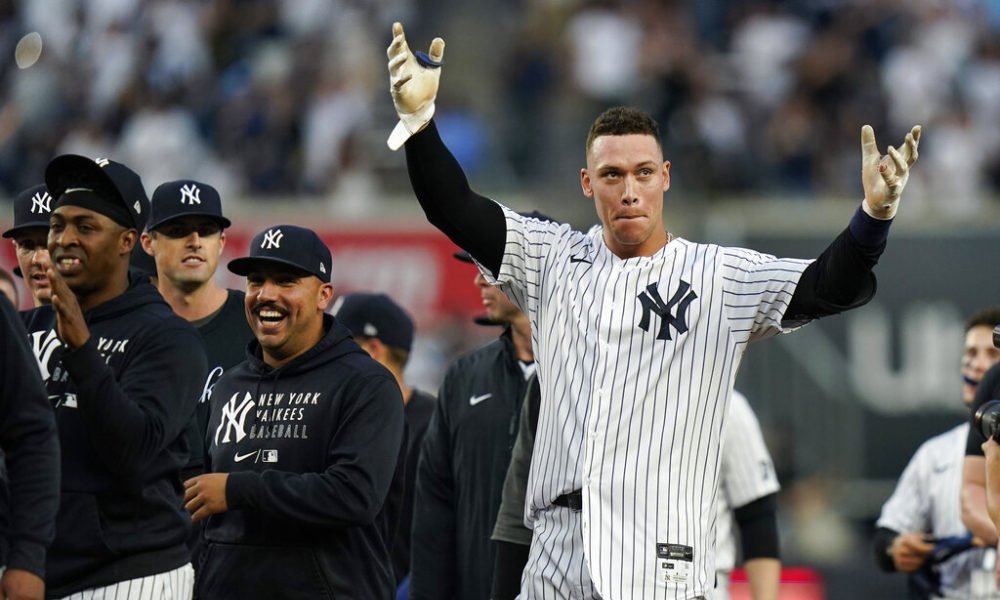 Rafael Devers responded when push came to shove for the Boston Red Sox. Aaron Judge was in charge of giving the final push to the New York Yankees. And Buster Posey propelled the San Francisco Giants to the NL West title, condemning the Dodgers – with their 106 wins – to a dangerous wild-card game.

In one fell swoop, the key to the Major League Baseball playoffs was defined on Sunday.

No complex tiebreaker situations. No chaos on the last day. And for fans who wanted drama – don’t worry, it’s coming up.

There will be a Yankees-Red Sox game to open the postseason – life to death at Fenway Park. Sounds familiar?

“We’ll be ready,” said Boston manager Alex Cora. “And it should be entertaining.”

Thanks to decisive hits by Devers and Judge, Boston and New York scored runs in the ninth inning of Game 162 to seal their tickets in the wild card game Tuesday night, when Yankees ace Gerrit Cole starts against Nathan Eovaldi. Rafael Devers (foreground) celebrates after hitting a home run for the Boston Red Sox in a 7-5 win over the Washington Nationals on Sunday, Oct. 3, 2021. (AP Photo / Nick Wass)

In the interim, Bucky Dent’s home run over the Green Monster that catapulted the Yankees over Boston in the memorable 1978 AL East title playoff game will be dealt ad nauseam.

You can also read:  Cuban José Iglesias is released by Angels

On the sidelines were Vladimir Guerrero Jr. and his Toronto Blue Jays, as well as the Seattle Mariners. Both were eliminated by the results of the Red Sox or Yankees. With a two-run homer by Devers, Boston rallied to beat Washington 7-5. Judge singled for New York to beat Tampa Bay 1-0.

“Unfortunately, our fate was in the hands of another team,” said George Springer, who hit a pair of home runs in Toronto’s 12-4 win over Baltimore. “We had a hope, but it could not be given.”

The Giants conquered the NL West with 107 victories, a record harvest for the franchise, by beating San Diego 11-4, with Posey driving in three runs. They needed to win all those games to finish ahead of the defending World Series champion Dodgers.

You can also read:  Cuba defeats the Dominican Republic at the start of the Caribbean Series

“It will be very difficult to have another fight like this for a long time,” said Posey, the receiver who owns three World Series champion rings and did not play last season due to the COVID-19 pandemic.

The Dodgers will have to contend with fiery St. Louis Cardinals in the NL wild card clash on Wednesday night. It will feature another compelling starting matchup: Max Scherzer vs. Adam Wainwright.

The divisional series, best of five games, will begin Tuesday with the AL crosses.

In one, 76-year-old Tony La Russa will lead the Chicago Red Sox against 72-year-old Dusty Baker and the Houston Astros.

On Friday, the NL series will kick off with Charlie Morton and the Atlanta Braves visiting Corbin Burnes and the Milwaukee Brewers, eager for their first World Series crown.

Posey and the Giants will host the winner of the wild card duel at Oracle Park.

By beating Baltimore in a losing cause, Guerrero hit his 48th home run, tying Kansas City’s Salvador Perez for the lead in the majors.

The Mariners’ 20-year playoff drought dragged on when Shohei Ohtani hit his 46th home run and hit 100 RBIs for the Los Angeles Angels to defeat Seattle.

“Baseball is back in Seattle,” said Mariners manager Scott Servais. “We couldn’t reach the finish line, but I think everyone realizes we’re on our way, and I was delighted that so many people got on our train because we will have a lot of fun.” (AP)