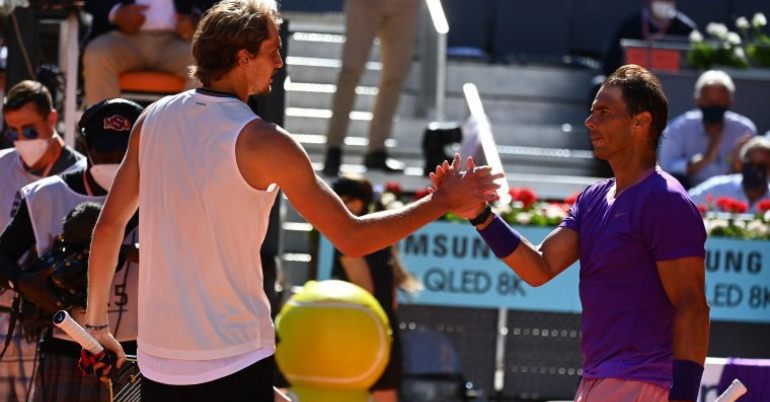 German Alexander Zverev beat world number two Rafael Nadal this Friday by a 6-4 double, qualifying for the semifinals of the Madrid Tournament, where he will meet Austrian Dominic Thiem.

In the first set, Nadal managed to break a blank to go 4-2, but his rival immediately returned the break to 4-3 and tied with his serve 4-4.

The German broke again, taking advantage of the inaccuracies of Nadal, who conceded a double fault, to go 5-4 and close the set with his serve.

Nadal managed to save two break balls to get closer to 4-3 and continue resisting only to see how in the last game, Zverev certified the victory with his serve.

Zverev will play the semifinal against Thiem on Saturday, who beat American John Isner 3-6, 6-3, 6-4 in the morning.

Isner started by breaking his rival’s serve early to become strong later with his serve and take the first set.

In the second set, at 2-2, Thiem managed to lift four break balls to finish going 3-2 and broke in the next to get 4-2, helped by his opponent’s mistakes to end up taking his sleeve.

You can also read:  Tsonga and Gasquet, to quarters

At 4-4 in the third set, Thiem managed to break Isner’s serve to get 5-4 and serve to win the match in just under two hours.

In the penultimate match of the day, Norwegian Casper Ruud beat Kazakh Alexander Bublik 7-5, 6-1 and the winner of the match between Italian Matteo Berrettini and Chilean Cristian Garín will be measured in the semifinals.

In a tight first set and with 5-6 on the scoreboard, Ruud took his sleeve after breaking the serve of his rival, who had lifted three previous set balls.

In the second set, it took two breaks for the Norwegian to win the game and enter his third semi-final after those in Rome last year and those in Monte Carlo in April. (AFP) (GG)

You can also read:  US Open finalists are citizens of the world