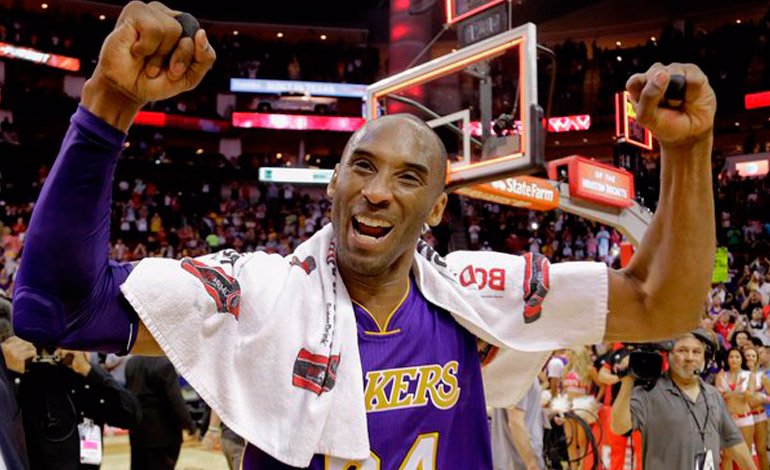 The day of Kobe Bryant’s retirement as a professional is approaching, and the Los Angeles Lakers will put the finishing touch to a season in which the player has received an ovation in all the halls of the League, although nothing will be able to match the sensations that will be experienced this Wednesday at the Staples Center.
For the simple basketball fan, the numbers will say that Bryant says goodbye with five NBA rings (the active player with the most titles along with Tim Duncan), 20 seasons in the League (all on the same team), once MVP of the regular season (2008), twice chosen as Finals MVP (2009, 2010) and 18 consecutive appearances in the All-Star Game.
They will reflect that he finished his career with more than 48,500 minutes played (sixth in history); more than 33,500 points (third in the ranking), including the 81 he scored on January 22, 2006 against the Raptors and the 24 times he scored at least 50 points in a game – behind only Wilt Chamberlain (118) and Michael Jordan (31)-; nine times in the defensive quintet of the year, and eleven times in the best quintet in the NBA.
Even so, the statistics do not really cover the spectrum left by the shooting guard, for many one of the best players in the history of the NBA, a rebellious version of Michael Jordan, almost mimicked in terms of skill and plasticity.
Chosen in 13th place in the 1996 college draft by the Charlotte Hornets, that slender, graceful young man eager to take on the world has starred in some of the most electric moments in the NBA in the last two decades, wearing both the number 8 like 24, and causing, perhaps, both numbers to hang in the future at the top of the Staples Center.
And in his last months as a player, he has been shedding that fierce competitiveness that he always displayed, to reveal his most human and vulnerable side, with constant winks to his family and even to the fans during games.
For all these reasons, the final tribute that the Lakers are preparing promises strong emotions.
“The game against Utah is going to be a ‘zircus’, a mixture of a zoo and a circus,” John Black, the team’s vice president of communications and ultimately responsible for all the behind-the-scenes logistics at Staples, told the Los Angeles Times. Center.
The bassist of the Red Hot Chili Peppers, Flea, will be in charge of interpreting the national anthem of the USA “in the style of Jimi Hendrix”, and after the presentations of both teams, there will be a video tribute of several minutes.
The Lakers plan to bring in about 30 of Bryant’s former teammates, including confirmed ones like Shaquille O’Neal, Robert Horry, Rick Fox, Ron Harper, DJ Mbenga and Adam Morrison, for a meeting with “perhaps higher” crediting demand. to that of an NBA Finals, according to Black.
The franchise claims to have rejected “hundreds” of requests and maintains that the approximately 600 seats available for journalists will be fully covered.
“It’s unprecedented for a regular season game,” Black said.
Bryant, who will undoubtedly enter the Hall of Fame in the future, has received all kinds of gifts from the other franchises in the League since announcing his retirement at the end of November at the end of this season.
Among them, some of a personal nature such as the T-shirt he received from his Lower Merion High School in Philadelphia, and others more casual such as reading glasses, a cane, a bathrobe with his nickname “Black Mamba” embroidered in gold, a subscription to a year to Netflix, a remote control and hemorrhoid cream, all courtesy of his close friends Chris Paul, Dwyane Wade and Carmelo Anthony.
The Lakers will give him a series of gifts privately before his last game, but everything that happens after, since he laces his boots for the last time, will be recorded by a huge production team.
The player intends to release a film about his twentieth season in the NBA, and everything that happens tomorrow will have a special place in that work. Up to five cameras will follow each and every one of Bryant’s movements from the first hour of the day.
He, little given to getting emotional, will have the biggest challenge of his career ahead of him if he tries to avoid tears. EFE

You can also read:  LeBron James' Space Jam already has a release date