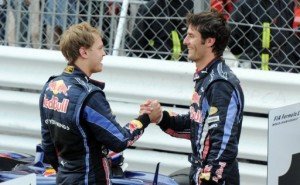 PARIS, (AFP).- Through the dissemination of a photo, in which the German Sebastian Vettel and the Australian Mark Webber are seen smiling with open arms, the team wants to show that its drivers have made peace after having collided at the Turkish Grand Prix . The image is dated this Thursday and was taken in Milton Keynes, a city in the south-east of the United Kingdom where one of the company’s headquarters is located. The two drivers have had a “positive meeting” in the presence of the team, which “forgets the accident” on Sunday, Red Bull said.

The staging is of quality, and is identified with the brand’s reputation for good marketing and public communication, whether in extreme sports or in nightclubs. And in Formula 1 also Red Bull serves as a planetary showcase.

You can also read:  Red Bull will start in the front row, Alonso behind

The successes achieved last year and this season in the single-seater competition are welcomed by the brand, but the disappointment of the 41st lap at the Istanbul Park circuit is not the same.

Vettel, who tried to make a difficult overtaking of Webber to get into first position at the Turkish Grand Prix, missed his attempt and ended up breaking his car, forcing him to leave, while the incident ended up costing Webber two positions , and finished third.

“The only thing I ask of the drivers is, yes, you can race against each other, but give each other space. It is exactly what did not happen, “complained the team’s boss, Christian Horner, lamenting the 28 points that were offered in a “tray” to the McLaren, who signed the first and second position in Turkey.

You can also read:  De Silvestro would be the first woman in F1

“It’s a p… disaster!” Webber hotly analyzed, while the German made gestures, putting his index finger to his temple, to show that his teammate was crazy. Of all this there were no echoes this Thursday, a day in which the errors of each other were assumed. “The team got us to a good position. What happened is not good. I feel sorry for them that we lost our minds in the race,” Vettel said in a statement.

“It’s a shame for the team, because we lost a good opportunity to win the race,” Webber relativized in another statement, noting that Formula 1 is “a sport” and this “kind of thing can happen.” About his partner, the Australian stressed that he and the German will do everything possible so that what happened in Istanbul “does not happen again.”

You can also read:  Rossi: "Starting from the third row and getting twenty points is very good"

“We will continue to work openly together. No problem. We are professionals. This does not change our way of working together, Vettel confirmed for his part.

Neither of them acknowledge their responsibility in the accident, nor do they apologize to their teammate. In fact, Vettel points out that Red Bull has a “very strong spirit” and Webber says he is “focused on the next race in Canada” on June 13.

In Formula 1, grudges usually last. The rivalry between Webber and Vettel may not be as strong as the one that once reigned between Frenchman Alain Prost and Brazilian Ayrton Senna at McLaren. But the harmony at Red Bull has been broken, and the team’s communication exercise doesn’t change anything.